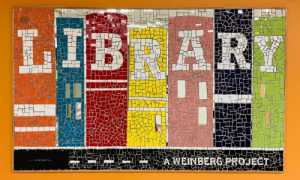 The Weinberg Foundation, and its more than 30 Library Project partners, are celebrating the 16th and 17th school libraries renovated as part of the Baltimore Elementary and Middle School Library Project. The library at Maryland School for the Blind will be completed in the fall of 2020 with Fallstaff Elementary Middle’s library slated for the spring of 2021.

This initiative is a multi-year, collaborative effort to design, build, equip, and staff new or renovated elementary/middle school libraries in Baltimore neighborhoods where many students face academic challenges. This effort has been built on the findings of more than 62 national studies that have found a well-equipped, well-staffed, well-resourced library can override the negative impact of poverty on a student’s academic achievement.

The Foundation has committed $10 million to renovate up to 24 libraries. The project, which began in 2012, has renovated 15 libraries to date. Of that $10 million, the Foundation has spent approximately $8 million and leveraged an additional $23.5 million in support from federal, state, and local funds, as well as support from Baltimore City Public Schools, and several additional corporate, philanthropic, and individual donors.

Partnerships are integral to the success of the Library Project. Many participating partners deliver in-school programming and several others provide additional services such as new winter coats from Operation Warm, daily newspapers for instruction from the Baltimore Sun, free books for the shelves of the library and family engagement nights from Enoch Pratt Library, and backpacks of food from the Maryland Food Bank. Most notably, the Maryland Food Bank, with Weinberg support, has provided more than $1 million worth of food to Library Project families via the Client Choice Pantry and the Backpack Program through 15 of the libraries over seven years. By the spring of 2021, more than 7,700 students will directly benefit from this initiative. 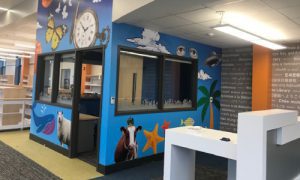 The Maryland School for the Blind (MSB) is a nonprofit private school that serves students who are identified as blind or visually impaired. MSB provides quality educational programs for individuals from infancy to age 21. As a statewide resource center, MSB provides outreach, educational, and residential services for students to reach their fullest potential by preparing them to be as successful, independent, and well-rounded contributing members of their communities as possible. The renovated library at MSB will also include current collections and a lending program for families of visually impaired students statewide that lends out both braille, large print, and tactile books as well as tactile toys and equipment like slates and braillers. The school’s new slogan is “See beyond,” and it is very appropriate for this new library, which is providing the tools to see beyond their campus walls and broaden their imaginations through accessible technology and design. MSB’s library is setting the gold standard for school library accessibility for visually impaired students in Maryland.

Fallstaff Elementary/Middle School in Upper Park Heights serves more than 500 students from pre-kindergarten through grade eight. Fallstaff is a Title I school with 55 percent of the student population meeting income criteria for Title I funding. The student population has grown by 18 percent over the last five years. Fallstaff focuses on college and career preparedness and believes that “The Race to excellence begins with a Book!”