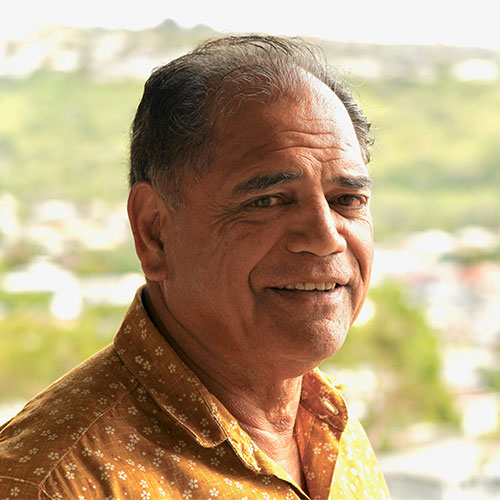 Mr. Kalama is actively involved with numerous boards and community organizations, including many leadership roles. He currently serves as a director of Harold K.L. Castle Foundation, as well as First Hawaiian Bank Foundation, and president of the Friends of Hawaiʻi Charities. He is a former trustee of Kamehameha Schools (2007- 2019).

Recent highlights of Mr. Kalama’s career include delivering the opening speech (“Role of Indigenous People”) for the 2016 Honolulu convention of the International Union for the Conservation of Nature (IUCN), which included attendance of 9,000. In 2011, Mr. Kalama coordinated and led the protocol and greeting of his Holiness the Dalai Lama in conjunction with the Pillars of Peace Symposium. The previous year, Mr. Kalama served as chair of the Asia Pacific Economic Conference (APEC) Committee on Culture. He coordinated and delivered opening remarks on Hawaiian culture on behalf of Secretary of State Hillary Clinton at a State Dinner for visiting trade ministers.

Born in Honolulu, Mr. Kalama is a graduate of Oregon College of Education (now called Western Oregon University), Bachelor of Science (Economics), and he received his graduate banking degree at Pacific Coast Banking School-University of Washington, where he also served as a faculty member from 1995-2015. He is a former teacher at Kailua High School and with the Honolulu Community Action program. Mr. Kalama also attended University of Hawaiʻi Law School.

Mr. Kalama enjoys a variety of outdoor activities, especially paddle boarding and canoeing on the ocean waters around the Islands. He also loves to help others to enjoy the beauty and challenge of these sports. Mr. Kalama is a member of the Kailua Canoe Club and serves as a coach and paddler for Team Outrigger Hawaiʻi. He and wife Sandy have four adult children (two sons, two daughters) and 12 grandchildren.